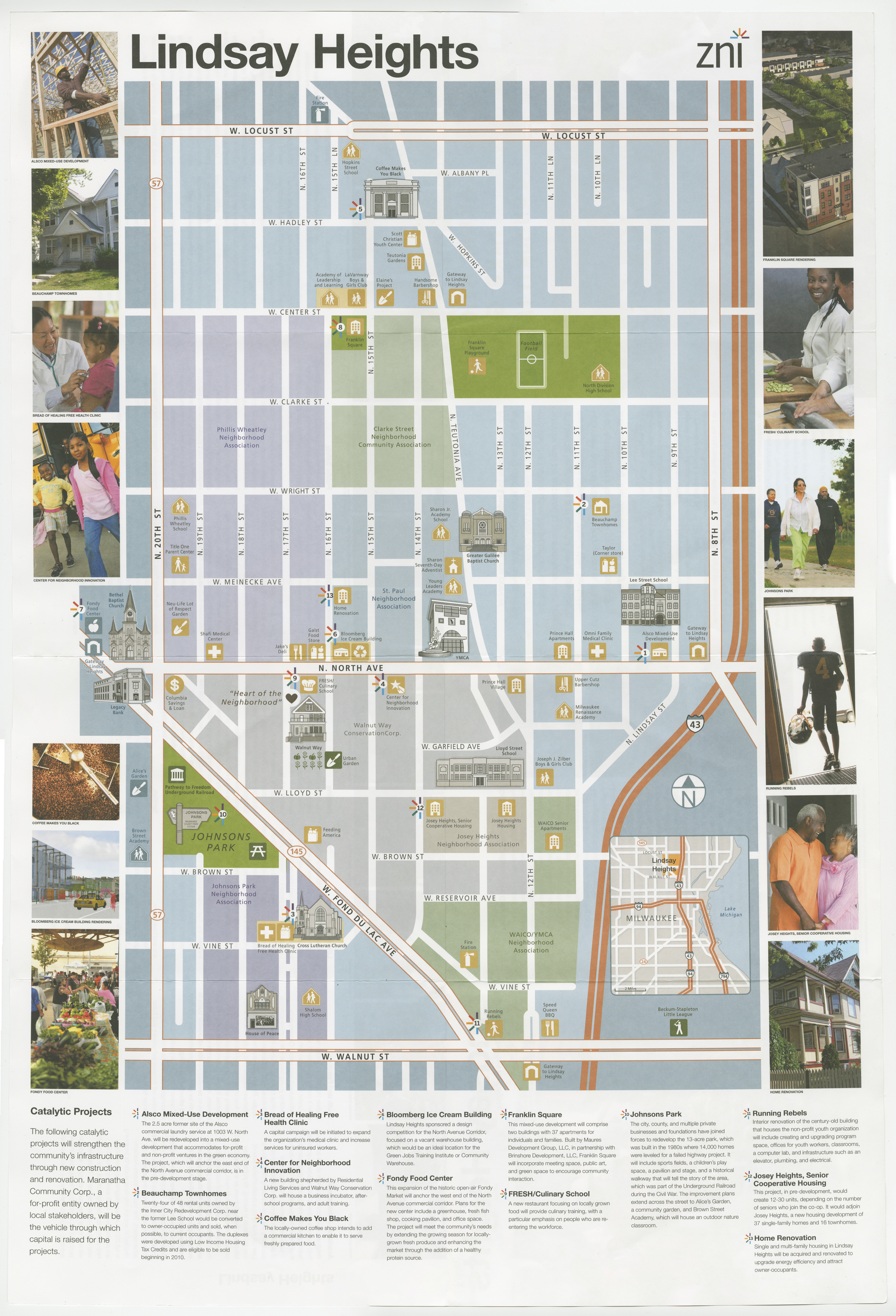 This map, created in the early 2000s, details Lindsay Heights, a neighborhood located on the City of Milwaukee’s near north side. Underneath the map is a list of thirteen “catalytic projects” in various stages of completion that were developed to “strengthen the community’s infrastructure through new construction and renovation.” Each project has a designated number next to it that corresponds to its location on the map.

The larger Lindsay Heights neighborhood contains smaller communities that are blocked out in different colors on the map, including Walnut Way. The Walnut Way Conservation Corp. headquarters and their planned Center for Neighborhood Innovation are centered in a grey area of the map, along with several additional community-based organizations and the twelve other featured “catalytic projects.” The Zilber Neighborhood Initiative (ZNI) logo is also depicted in the top right-hand corner of the map. The map includes several prominent landmarks that can be found throughout the Lindsay Heights community, as well.

While African Americans have lived in Milwaukee since its charter in the 1840s, the city’s African American community did not take off until the Great Migration of the early-to-mid twentieth century. As in other northern American cities, “restrictive housing covenants, redlining, housing discrimination, labor market discrimination, and social perceptions of race” consigned Milwaukee’s African Americans to a small portion of the inner city, called Bronzeville.[1] Instead of allowing racial segregation to defeat them, Bronzeville residents became increasingly self-sufficient and built an economically flourishing community. Community members owned businesses around the Walnut Street area and employed their neighbors. They took pride in maintaining their neighborhood, built social assistance programs, and opened their homes to anyone who needed a hot meal or a place to stay.

In the second half of the twentieth century, urban renewal and highway projects devastated Bronzeville’s formerly strong economy. For instance, developers razed many African American-owned businesses and homes for the construction of the I-43 North-South Freeway—creating faster commutes for white Milwaukeeans who had fled to northern suburbs after World War II. Lindsay Heights is a neighborhood that now occupies part of what was once considered Bronzeville. In recent years, Lindsay Heights residents have actively worked to revitalize their once-flourishing neighborhood by developing organizations and programs that specifically address the distinct needs of their community. The Walnut Way Conservation Corp. (WWCC), for example, was created in 2000 “to sustain economically diverse and abundant communities through civic engagement, environmental stewardship, and creating venues for prosperity.”[2] WWCC is best known for their community garden projects, through which they grow vegetables in formerly empty lots and offer opportunities for local adults and teenagers to work hard and learn business skills while serving their community. At the time this map was created, the organization had plans to build a Center for Neighborhood Innovation on the corner of North Avenue and North 14th Street. Since that time, WWCC has collaborated with HOME GR/OWN and UWM Community Design Solutions to create a pocket park, called Sunshine Park, in that location.[3] WWCC’s most recent project is called the Innovation and Wellness Commons and is intended to be used for similar purposes that had originally been planned for the Center for Neighborhood Innovation.

Maps are important historical documents. They allow historians to orient changes and continuities in a distinct area within time and space. The landmarks, boundaries, symbols, and colors a map’s creator identifies and uses can also reveal how they thought about the relationships between space, place, and community identities in a particular historical moment. In the case of this map, its creator clearly defines the boundaries of Lindsay Heights at Walnut Street, North 20th Street, Locust Street, and, perhaps most noteworthy, I-43. This visual representation of the highway helps illustrate how its construction divided Bronzeville into separate neighborhoods in the early twentieth century. Johnson’s Park, a green triangle in the bottom left-hand corner of the map, was built in the 1980s to replace the homes that were demolished in the late 1960s for the construction of the highly controversial and never realized Park West Freeway. Johnson’s Park, therefore, becomes symbolic of community members reclaiming the ownership of and beautifying the land on which community residents once lived.

The area within the map’s boundaries is delineated with color-coded community areas and dotted with key institutions, including churches, schools, medical centers, and restaurants. It is important to consider why the creator of this map chose to feature these landmarks on a map that was made to emphasize a strong sense of community togetherness and growth. For example, churches have played a very important role as key centers of community, providing safe gathering spaces and offering economic, social, and emotional assistance to their members that allowed a greater sense of self-sufficiency.[4] Likewise, many of the other institutions featured on the map offer support to community members, providing employment opportunities, healthy food options, affordable health care, quality education, and more. Therefore, they can be interpreted as excellent reflections of Lindsay Heights residents’ commitment to preserve the history of self-sufficiency and togetherness once embodied in Bronzeville.

The main focus of any community-based organization is to provide a conduit for members of a specified area to determine the values of the place in which they live and take an active role in its improvement. A key part of determining what any community prioritizes is looking at the work that they have already done, such as the projects that are outlined in this map’s key. The thirteen “catalytic projects” identified in this map are all concerned with building affordable housing and health care facilities, stimulating business creation and job growth, utilizing green space, and growing food in Lindsay Heights. By identifying the presence and work of several different community organizations, this map suggests that these were collaborative efforts within the larger Lindsay Heights neighborhood in the early 2000s. This level of detail invites two distinct approaches to how the map can be used: a microstudy of any individual component or a broader analysis of how they are all linked and what that connection says about Lindsay Heights as a whole. 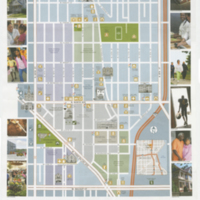