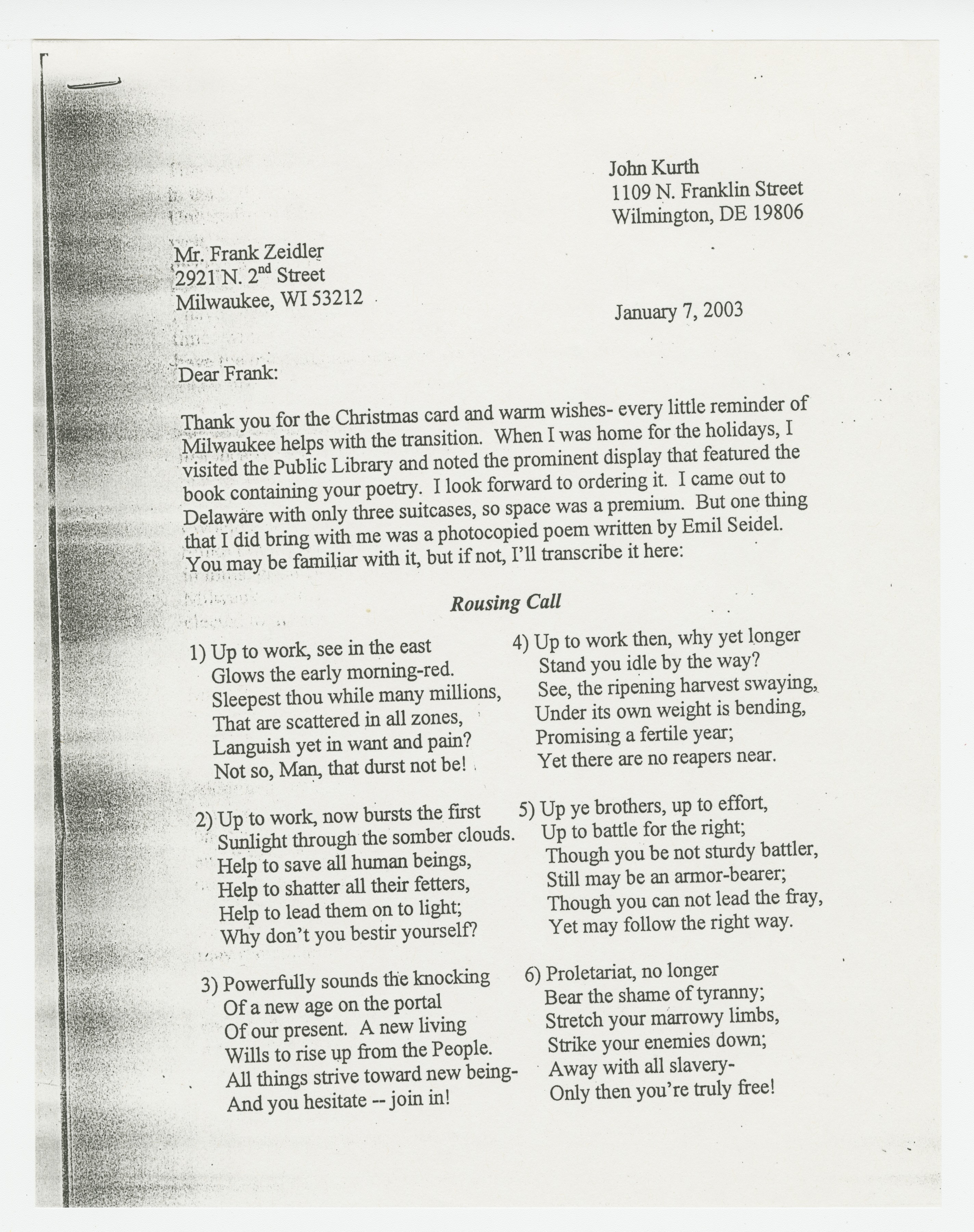 This is a photocopy of a type-written letter John Kurth of Delaware wrote to former Milwaukee mayor and devoted socialist Frank Zeidler in early January 2003. Written in response to Zeidler’s Christmas card, the two appeared to have been in regular contact—regular enough at least to exchange holiday wishes. In the letter, Kurth refers to a trip to Milwaukee over the holidays, which he refers to as “back home”—suggesting a longstanding basis for the relationship between the Delaware resident and Zeidler. Kurth also expresses his excitement about the publication of Zeidler’s poetry in a book he encountered on display at the Milwaukee Public Library during his visit. Kurth closes his letter with a poem written by another former Socialist Milwaukee mayor, Emil Seidel. The poem has no date but may very well have been written during his mayoral term (1910-1912), or further into his career as he worked to end U.S. involvement in World War I.[1] Seidel’s poem calls for working people to rise up against the oppression of capitalism. Kurth appears particularly attached to this work, indicating that it is one of the few things he brought back with him from Milwaukee to Delaware.

Boasting a strong working-class politics heavily influenced by European migrants, Milwaukee became the largest city in the United States to have had a socialist mayor and the only to have had three socialist mayors in the early twentieth century. Emil Seidel, Milwaukee’s first Socialist mayor, served for two years (1910-1912). After a brief interruption, Daniel Hoan served as mayor for twenty-four years (1916-1940). Milwaukee’s third socialist mayor, Frank Zeidler, served for twelve years (1948-1960)—the last of Milwaukee’s socialist administrations (as of 2019). After a failed presidential run on the Socialist Party ticket in 1976, Zeidler did not run for another public office.[2] Zeidler remained a prominent figure in the party, however, participating in annual socialist picnics, speaking at local and national events, and regularly corresponding with other socialists and activists until his death in 2006.

Kurth’s letter displayed his familiarity with Milwaukee socialism and its impact on the city’s history. It also reveals how poetry served as an important cultural expression of this heritage since at least Seidel’s tenure as mayor. Zeidler published a collection of his own poetry titled Reflections in 2002.[3] While not as politically expressive as Seidel’s work, Reflections offered snapshots of Zeidler’s life, including his three terms as mayor and his 1976 presidential run. In his 1972 poem, “I Am the Munitions-Maker, and I AM,” Zeidler states, “I try to stay out of public life as much as possible because of the nature and secrecy required in my work.” This assertion might be unexpected coming from such a public figure. Yet it recognizes the danger of his continued devotion to socialist politics in the days of the Cold War due to the fear of leftists in the public and the general mistrust of anything deemed un-American.

Emil Seidel also wrote many poems, including the one enclosed in the letter. His own time in office was limited, but he worked tirelessly on anti-war efforts, education reform, and other local and national issues. Having lived through both World Wars and the Great Depression, Seidel saw times of hardship, divide, and corruption in American culture. In the poem attached to this letter, Seidel called on his fellow Americans to rise up against the capitalist exploitation that he saw as having produced their troubles. While certainly a product of Seidel’s time, the poem could apply to many historical moments, as shown by its continued importance to the author of this letter.

Kurth’s letter shows that a poetry tradition spanned throughout Milwaukee’s Socialist movement. Disparaged as “Sewer Socialism” by critics, Milwaukee’s socialists were devoted to solving city problems with pragmatic and infrastructural solutions.[4] However, the poetry in this letter illuminates a more romantic side—a movement focused not just on sewers but on the arts too. 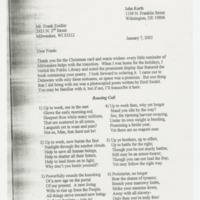